Last week, the Swedish Federation announced the team which will compete for Sweden in Tokyo. One of the four combinations is Antonia Ramel with Brother de Jeu (by Voice). Brother de Jeu was the auction topper of the Excellent Dressage Sales in 2015.

The team
The other three combinations of the team are Patrik Kittel with Well Done de la Roche CMF, Juliette Ramel with Buriel KH and Therese Nilshagen with Dante Weltino. This is the same team as which represented Sweden in 2019 at the European Dressage Championships in Rotterdam, where they won the bronze medal.

The Swedish national coach Bo Jena says she is very much looking forward to going to Tokyo with these four experienced combinations. All combinations are in good shape. Recently Sweden occupied the full podium of the Grand Prix Special during the CDI4* in Le Mans.

Auction topper
For an amount of € 170,000,- the by Dominique Filion trained Brother de Jeu (by Voice) left for Sweden, where Antonia Ramel became the new rider of the gelding. She is stationed at teammate Patrik Kittel’s stable. Patrik is also the trainer of both Antonia and her sister Juliette. 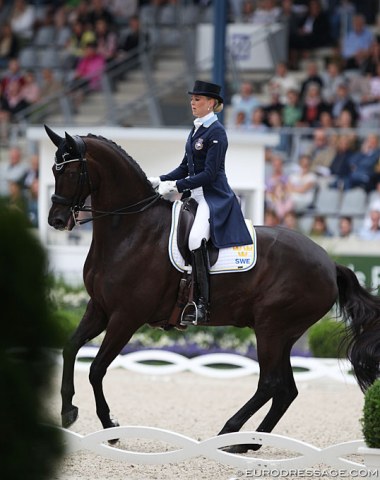