In February this year we wondered how the much-discussed Four Legends (by Wynton) is doing. The stallion, bred by the Jansen family, became performance test winner at the KWPN in 2016 and was sold at the Excellent Dressage Sales that same year for an amount of 605,000 euros. At the time, Judy de Winter decided to put the stallion up for sale. Recently the news came out that plans have changed and Lynne Maas will be the new rider of the black stallion.

Grand Prix is the goal
A sale of Four Legends seems to be off the table, now that Lynne Maas has him under the saddle. She says: “I think black horses are beautiful anyway, so riding this beautiful stallion is my thing. Last weeks, I’ve ridden him a few times and it’s going pretty well. He learns quickly and I think he’s very similar to Electra, one of my Grand Prix horses. They resemble each other in the way they move. Four Legends is just easier to deal with.

He is also very diligent and has a lot of enthusiasm. My job now is to win him over, but this seems to be heading in the right direction. We’ll see what the future will bring us, but the goal is to compete at Grand Prix level.

Talent for piaffe
In recent months Four Legends has been trained by his owner Judy de Winter. Maas says: “I continued where Judy left off in training. The other day she came into the arena in amazement as I rode the piaffe with Four Legends. I assumed he was familiar with this exercise and he did this quite well. He went up pretty easily and I rode back a little bit and he was already staying in place very well. Then Judy told me he had never done this before. But he is so eager to learn and despite the fact we still have homework to do, you can see that he has talent for the piaffe. ” 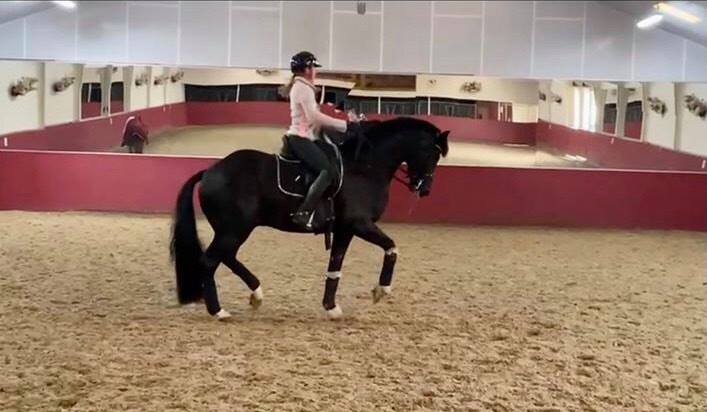